Workshop at Cutting-EEG 5 in France

After a long delay due to Corona, an in-person workshop on combining eye-tracking and EEG will be held at the Cutting-EEG meeting in Aix-en-Provence on October 6 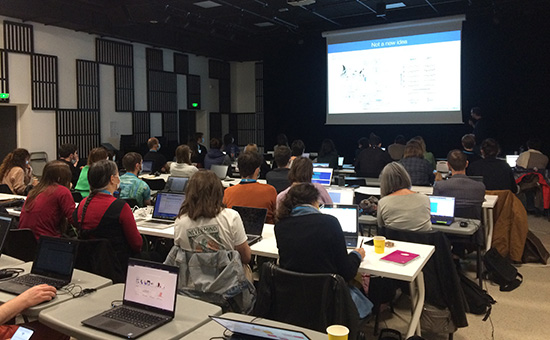 Version 0.90 of EYE-EEG was uploaded. Check out the changelog for new features and bugfixes.

The "unfold" toolbox paper is published

You can read the open-access paper at PeerJ.

EYE-EEG has a "sister" toolbox

The new unfold toolbox complements the capabilities of EYE-EEG for analyses of EEG during natural vision and they both work together seamlessly. Check out the reference paper for more infos.

This version contains several improvements, including a function to overweight certain artifacts for optimized ICA training (OPTICA) for free viewing experiments and the option to automatically insert "bad_ET" markers so that intervals with bad eye-tracking data in the continuous recording are marked rather than removed and ignored by the eye movement detection. This version also contains several bugfixes.

You can now also find the EYE-EEG development version on Github. This version contains the newest features but may not be stable (so use it with care).

EYE-EEG is maintained on GitHub. Github will always contain the most current stable EYE-EEG version. The download link on this website will from now on also point to the most recent Github version Please do not rely on EEGLAB's Extension Manager for the most recent updates, the extension manager will often show an outdated version. Of course, we'd love to see you contributing bug fixes and improvements to EYE-EEG on Github!

Poster with some updates presented at ECVP

A poster describing some updates to EYE-EEG is presented at the European Conference on Visual Perception (ECVP) in Berlin.

We identified a bug in EEGLAB's pop_resample function that can cause erroneous results with EYE-EEG. pop_resample changes the sampling rate, but does not update the duration of the events in the EEG.event structure accordingly. This means that the durations of detected saccades and fixations will be incorrect if the user chooses to resample the (combined) dataset after eye movement detection. This will lead to wrong outputs of the functions pop_eyetrackerica and pop_ploteyemovements. Since some EYE-EEG users downsample their combined ET/EEG dataset (e.g. before running ICA), they might be affected by this potentially serious bug. The EEGLAB team was notified of this problem and it should be fixed in the upcoming newest versions of EEGLAB. Thanks to C. Huber-Huber for finding this one!

UPDATE 17.07.2017: The bug was fixed in version 14.1.1b. Now pop_downsample.m also updates EEG.event.duration. Please upgrade to the newest EEGLAB version.

There will be a pre-conference workshop at the European Conference on Eye Movements. The workshop is aimed at beginners interested in combining eye-tracking and EEG and will give an introduction to some theoretical and practical issues related to this technique. It will take place prior to ECEM on Aug 19th, 2017 in Wuppertal (Germany). [Details]

There will be a hands-on workshop on EYE-EEG on October 01, 2015 by Olaf Dimigen at Cutting EEG-2 in Berlin. It will focus on applications of simultaneous eye tracking (e.g. pupillometry) as well as the analysis of fixation-related potentials (FRPs) in free viewing using a combination of EYE-EEG and custom scripts.

As of today, EYE-EEG has been downloaded 401 times. About 25% of these downloads came via EEGLAB's extension manager and the rest via this website. How are you using the toolbox for your research? Send us your published work and we will add it to our new list of papers using EYE-EEG.

With Version 13, EEGLAB now allows to "install" the EYE-EEG toolbox directly via the GUI. Please note that plugins are now called extensions by the EEGLAB team. Of course you can also still download EYE-EEG via this website. Also, make sure that you subscribe to our newsletter, so we can inform you about major updates or critical bug fixes. We will not spam you.

This update fixes a critical error in the included version of the third-party function smoothdata().

This update fixes a severe bug under Mac OS

A workshop on EYE-EEG will be held on March 20, 2013, at UNITN, University of Trento, Rovereto, Italy. It will focus on applications of simultaneous eye tracking and the analysis of fixation-related potentials (FRPs) using a combination of EYE-EEG and custom scripts.